Standing on the Edge of Latin America 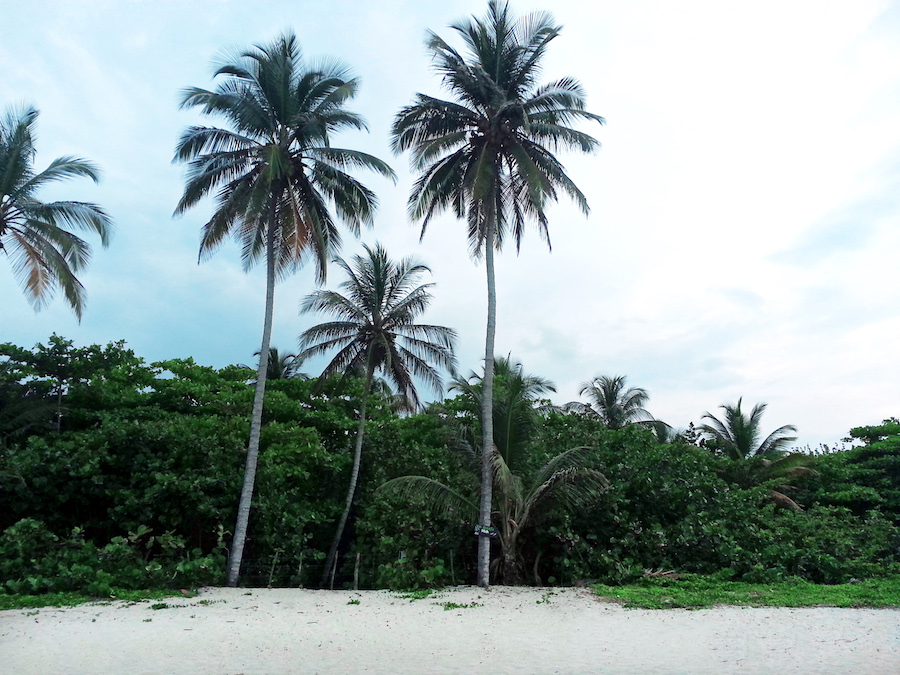 05 Jan Standing on the Edge of Latin America

Posted at 14:34h in South America, Stories by admin 0 Comments

We had finally relaxed, settled into the remoteness of our location, and let our guard down. We walked, hand-in-hand, picking up seashells, barefoot in the sand. You know, those cutesy things you’re supposed to do when walking the shoreline of a beautiful, Caribbean beach. We heard the breeze softly whistling through the trees, the melodic chirps from the colorful birds floating in the wind, and the gentle splash of waves breaking at the surf. We heard a shuffling of feet and leaves rustling next to us. All part of the ambiance, we thought. A few minutes later we heard more shuffling. Probably birds or small animals. We heard it again, this time accompanied by that sobering feeling you get when you realize you aren’t alone. Our eyes scanned the tree line. We stared into the thick forest of brown and green palm trees. Then, we both froze, wide-eyed, like deer in headlights.

There was a tall man in full camouflage and heavy boots, his face painted a wavy pattern of green and brown, holding a rifle, tucked strategically behind a palm tree. A few feet to his left was another fatigued man holding a gun that stretched the majority of his rigid body. I could feel my heart beating in my throat. I’m pretty sure I was holding my breath. We stood there for what I’m sure was only a few seconds, but what felt like an eternity. I could hear the loud thuds of my heartbeat. My hands were clammy. I was frozen on the outside, but everything in me was trying to run away. The two men never moved, never made a sound, and never broke eye contact with us. They held their stance, intently watching us.

We must have realized that we weren’t in any harm, or perhaps our fight-or-flight finally kicked in, because we both turned and started walking again. After a few feet, we looked at each other and realized neither of us knew what to do next. So we continued our stroll along the desolate beach for a few more yards. Eventually a river crossed our path, and we casually retreated back to our hostel. Along the way we heard the birds, the waves, and the feet shuffling in the forest. We didn’t talk much about it. We never asked about it. Maybe we didn’t want to know who the camouflaged men in the jungle actually were, why they were there, or if we should have been running instead of collecting seashells. After months on the road, we had grown familiar with the oddly predictable cadence of heart-attack inducing situations. Just another part of the experience when you’re standing on the edge of Latin America.