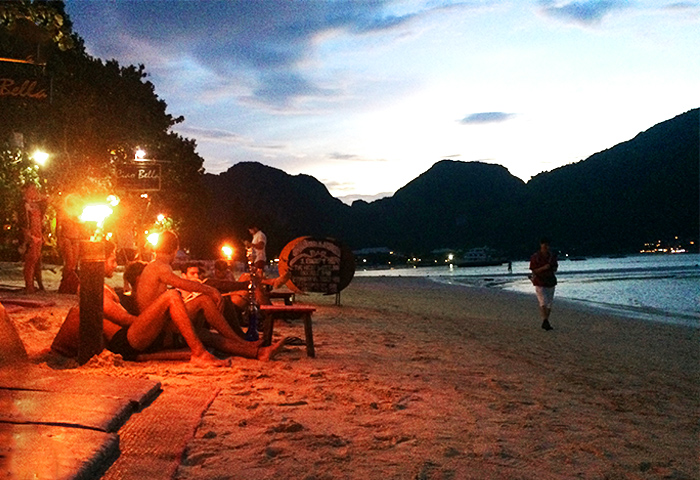 Don’t drink buckets of alcohol. I feel like I should have known this, or this wisdom would have been passed down by a concerned parent or an experienced friend. But it wasn’t – and I’m sure I can say this about any liquid you are contemplating drinking from a bucket, it probably won’t end well.

Sunburned and excited, we found two unoccupied rugs in the sand and sat down. Rumor has it, when in Koh Phi Phi you must partake in a ritualistic evening of drinking beneath the stars with other well-cooked tourists. We had our seat. The crystal clear Thai water gently broke onto the shore in front of us. Giant limestone crags framed in the bay and the view was ripped straight from a postcard.

Our animated server quickly greeted us with an ashtray and a smile. We were weak and at the mercy of one of the most breathtaking locations on earth. We eagerly agreed to two of the ‘specials.’ A few moments later we were handed our cocktails. A red, plastic sand bucket filled with a murky liquid, a few ice cubes, and a handful of straws. We had ordered one each. When in Rome, right? Though, unlike what you might see in civilized Italian bars, we were sitting on a rug, toes in the sand, drinking a disgustingly sweet and enormous cocktail out of childrens’ sand buckets on a small island off the coast of Thailand.

What happened next was incredible. Unfortunately, I don’t remember much of it. What I do know, is that the night was filled with lounging in hammocks, dancing with locals, exchanging travel tips with tourists from all over the world, and I distinctly remember a French man licking my arm.

The next morning, we remembered exactly how much fun a bucket-sized cocktail could be. The sun was brighter, too bright. It was hot, uncomfortably hot. I was hungry, thirsty, and had apparently lost my favorite pair of sunglasses. Luckily, Thailand is wise enough to have a cure for this type of situation. I would have handed over my life savings for the ungodly goodness that’s perfectly packaged inside of a coconut. The locals know this and they were ready. $1.50 and two cold coconuts later, I almost forgot about the plastic bucket of regret I had cheerfully drank the night before.

As an experienced friend, I adamantly urge you to say no to sand buckets of fruity cocktails. But, if you ever find yourself on the beaches of Koh Phi Phi, leave your sunglasses at home and go make terrible decisions with the rest of the gringos. You’re sure to regret it.

Travel writing for the wanderer.

Stories, photos, and eats from around the world.