Borders We Cross While Traveling 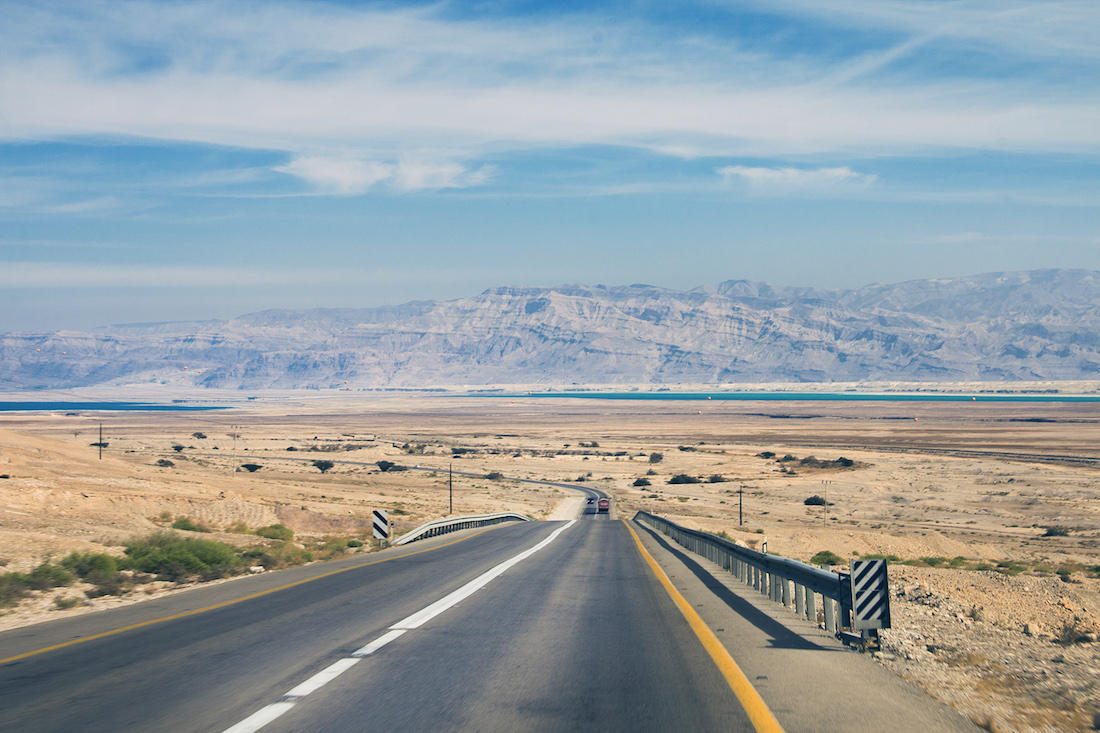 08 May Borders We Cross While Traveling

We left Tel Aviv at sunrise. Our reservations confirmed we would spend that evening sleeping in a Palestinian refugee camp. The goal was to get from the sunny coast of Israel to the divided and fought over land of Bethlehem. Regardless of how much planning or research went into the road trip, we would never be prepared for the adventure that lay ahead.

Hours ticked by and the terrain quickly faded from populated cities to sprawling sand dunes. We were at the Southern tip of the Dead Sea driving north to Jerusalem. From there, we would take a public bus into Palestine. We were uncontrollably unprepared for the reminder of our route. Political, cultural, and historical allegiances swayed information. Depending on which book you reference, which map you study, and which local you ask, the drive along route 90 is either Israeli controlled or Palestinian controlled. There is a tremendous difference between the two. The differences of which greatly impact how we should proceed. The same differences that don’t generally affect 99.9% of the world’s population. Honestly, it might not have affected us had we not been in a rental car or had I not been driving. The added irritants of wet swimsuits and a thin crusting of salt on our bodies exacerbated the uneasiness of the situation.

I was buckled in the front seat, bravely driving the quiet and arid two-lane road that divides Israel and Jordan. My husband, Aaron, who was dealing with a small bout of reverse elevation sickness and a debilitating fear of mountainside drives sat rigid in the passenger seat. We rode in silence, uncertain of the route that lay ahead of us and apprehensive about our first time crossing borders into Palestine. The extreme and contrasting elevations, the cliffside drive, and the sensory overload begged for attention. Paling in comparison to the mental preparation needed to drive into one of the most controversial and politically charged parts of the world.

The Dead Sea and the road surrounding it sits at roughly 1,400 feet below sea level. Save for a few hand planted palm trees and mega-resorts––both of which are extremely out of place––there isn’t much there. Salt covers everything from the buildings to the people. It’s dry and stagnant. There is a palpable level of pressure that comes with being below sea level. The air pushes against your skin, breathing is more labored, and sound disappears as it leaves your mouth. Lack of precipitation leaves the ground hard and lifeless. The parched landscape somehow creates the perfect backdrop for a horizon of beauty. The sky carries on for miles, loosely shaped mountains bracket the placid water and they all blend together in the most surreal pastel colors I’ve ever witnessed in nature. Beauty is abundant, but life is rare.

I assume that some locals live nearby. Available and ready to keep resort-bound tourists happy during the busy season. A few small houses are scattered on the dry side of the salt laden roads. Looking around, it was clear that things don’t thrive here. It feels slightly post-apocalyptic. A beach town that is stuck in a pressurized vacuum. Nearly abandoned except for a few hearty souls that refuse to leave the disappearing phenomenon. The air, the sounds, everything is dull and sluggish. The lack of longterm inhabitants and natural resources rid the route of any luxuries. For the vast majority of the drive there wasn’t anything at all. Our cell phones died instantly during the abrupt drop in elevation. The sheer struggle of trying to find a signal in the middle of nowhere drained the phones of all the energy they had left. It had a similar affect on us. We were disconnected and disoriented in the bewildering landscape.

Needing to acclimate and catch our breath, we stopped at a modest resort hugging the shoreline. We crawled into the saltiest water on earth and floated around in the Judaean Desert with our toes in the air. Once we had collected our courage and an uncomfortable amount of salt, we climbed back in the car to continue our expedition toward Jerusalem. Like anyone traveling to a war-torn and culturally contrasting part of the world, we were fed horror stories and tales of terror, reports of oppressive laws and sexist regulations. Stories we often disregard but sometimes poke their ill-informed heads out at the most inopportune times. The way of living in this part of the world is drastically different than what we are used to in the West. Coming from the fast paced and liberal city of Tel Aviv, we didn’t know what to expect from the generally unstable religious capital of the world.

Headlines had warned against females operating vehicles, showing skin, or venturing out alone. The family we would be staying with in Palestine warned us that the wife could not be left alone with a man. Never under any circumstance could a woman be in a room with a man if her husband wasn’t present. It is a cultural and religious decree. Females are held to different standards and obey a different set of rules. Aside from cultural impediments, our rental car company made it explicitly clear not to drive our car into Palestinian controlled territories. The lines of which are blurred, change frequently, and are nearly impossible to decipher. Depending on how you look at a map, you could argue for either side. A debate we hoped we wouldn’t find ourselves in, but began preparing for.

The longer we drove, the more our minds created potential obstacles. There was no map informing us that we were approaching country lines, no digitized voice telling us of which turn to make. No roadsigns telling us what city we were driving through, what the people were like there, if we were driving into dangerous situations. We followed a natural sense of direction and an unwavering optimism that has allowed us to traipse through foreign countries with a smile on our face. I’m not sure how I had envisioned the drive, but there was a small part of me expecting to see barbed wire covered fences, random acts of terror, and aggressive border control booths. In order to mentally prepare for all of the unknowns we had to worry about the worst-case scenarios. We needed to be ready for whatever may come our way and we had absolutely no idea what that might be.

So here I am, a newly appointed international driver steering our tiny car across wildly hostile and unpredictable borders. Forced to pit my apprehension against my optimism. I pull a sweater over my swimsuit then force a pair of leggings over my damp and salty legs. I sit up straight, feign confidence, and clutch the wheel. We were silent. The hum of the overworked engine in the background. Occasionally, the radio would abruptly turn itself on and play a mix of static and men preaching in Hebrew. The knobs had no affect. There was no way to shut it off. We just stared forward, waiting for it to shut itself off. An eerie and bizarre addition to the already wild drive.

Every few miles we encountered stunning scenic overlooks or armed guards at checkpoints. A unique juxtaposition of resources. With each camouflage painted hut on the edge of the road came a small army of fatigued and machine gun carrying Israeli officers. Every time I saw these obstacles I could feel my heartbeat pulse in my chest. I would tighten my knuckles around the grey steering wheel and pray we wouldn’t be forced to stop. Forced to have an important conversation in an unknown language. To be at the mercy of local government and military. Unsure whether our car would pass border inspections. Or if we would pass customs. Would we receive backlash for disrespecting rules and customs we are unfamiliar with, for being outsiders in a sacred land? With each checkpoint I gained a fierce appreciation for what I was doing. In my mind, I was actually conquering these imagined complications as I ticked off each long and breathtaking mile. I was crossing my own invisible borders, both mentally and physically.

Eventually my anxiety overshadowed Aaron’s affliction or perhaps we both just leveled off. I was ready for a break and Aaron was eager to drive again. I pulled off at a roadside restaurant selling falafel pitas and camel rides. We were lost in the right direction. Somewhere in the Israeli desert headed toward Jerusalem. No map or GPS to tell us what territory we were in and definitely no guidebook on which rules applied here.

There was a small part of me that admired myself for driving. As I peered out over the steering wheel, into the unfamiliar and unpredictable lands of Israel, I could feel my nerves hardening and my confidence growing. I was gaining proverbial street cred. If I could drive through Palestine, what else could I do?

In the end, we never ended up driving through Palestine. We later learned that the route we followed is open to Israelis and that Palestinians are forced to take an alternate route. We didn’t break any laws or traverse any forbidden roads. During the hot and uncomfortable hours between the Dead Sea and Jerusalem we didn’t know any of this. We didn’t know that we would never encounter a border. We didn’t know that we would make it out of that drive unscathed. We were forced to rationalize our imagination and our anxiety; mentally preparing ourselves for whatever may lie around the next corner. Later that evening, when we finally made it inside the gates of Palestine, all of the worries and obstacles from our drive seemed incredibly insignificant. Little did we know, we had only scratched the surface of survival that day.

Check back later for part two of the story : Taxi Ride in Palestine.